The philosophies underlying Basis designs are the sound principles of physics; provable concepts that result in the most accurate replay of records possible. Precise execution of those principles is critical, and you‘ll find Basis turntables are made with exacting care and precision machining unsurpassed in the industry.

Central to A.J. Conti‘s design philosophy is the Basis System Approach of product development. Here, each individual subsystem contributing to the performance of the product is identified. Specific goals for the performance of each subsystem are developed based on the function of that system. Each design is based on the fundamental principles of physics, and then tested and optimized to perform its function to the highest level. Only after each system has demonstrated superior performance at its defined function is it approved for use in the final product. The result is a purposefully engineered product.

When looking at other products it can be obvious that the designer has ‘fallen in love‘ with a certain aspect of a product. This may be a novel shape, a supposed isolator made of many layers of materials, or an unusual material. Such shortsighted, incomplete designs are all too common in the record player field and result in one-dimensional performance. With the Basis Systems Approach, the buyer is assured of a complete design, a truly refined final product that will withstand the test of time by performing at a state of the art level for decades.

There is solid engineering and precision fabrication behind every Basis product. To appreciate the level of sophistication, let‘s examine the thinking behind each main component of the turntable system. 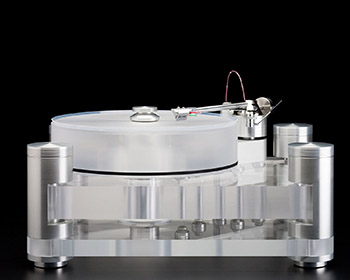 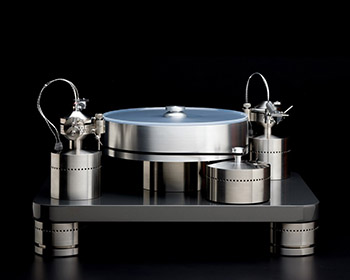 The AJ Conti Transcendence Turntable represents the finest turntable Basis Audio has offered to date. Beyond the absolute state of the art performance, the AJ Conti Transcendence Turntable offers total flexibility in terms of use with different tonearms, tonearms of unusual length, the ability to use any tonearm of any weight, different motor types, different platter types and weights, as well as any updates Basis might offer in the future.

The music lover who is fortunate enough to own this turntable will always be able to fit any improvement that Basis Audio might offer in the future without sending the turntable to the factory. Any upgrade would be a field, ‘drop in‘ upgrade.

The AJ Conti Transcendence is a fully isolated turntable, offering the advantages of immunity to outside noise, floor vibration, and other feedback inducing energy that would greatly degrade the sound of other turntables. This turntable will deliver the same state of the art sound in any installation circumstance. 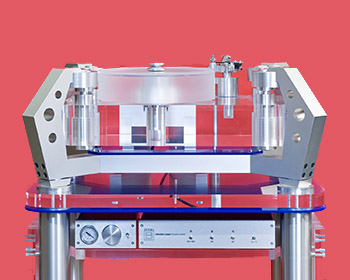 The Basis Work of Art turntable is Basis Audio‘s tribute to the science and art of vinyl music reproduction, an expression of the pinnacle of record playback. The Work of Art project began in the early 1990‘s, 10 years into the life of Basis Audio. In 1999 the Vector prototype, the first Basis tonearm, was able to more clearly show turntable and phono cartridge differences than ever before, and inspired new interest in the Work of Art project at Basis. The unflappable neutrality of the Vector allowed more informative listening sessions and measurement procedures to be conducted. After full testing and realizing the breakthrough performance of the Vector, Armando Conti, founder and President of Basis Audio, challenged and dedicated himself to build a turntable platform worthy of the Vector. Basis Audio introduced The Work of Art turntable, Basis Audio‘s statement of the ultimate turntable and arguably the finest record player ever produced, at Winter CES of January 2004.

The Work of Art turntable is the result of the same ‘Basis Systems Approach‘ of product development as other Basis products, where each individual subsystem contributing to the performance of the product is identified. Specific goals for the performance of each subsystem are developed based on the function of that system. Each system is designed, based on fundamental principles of physics, and then tested and optimized to perform its function to the highest level. Only after each system has demonstrated superior performance at its defined function is it approved for use in the final product.

The Work of Art turntable performs at an astounding level, validating the ‘Basis Systems Approach‘ as well as proving the validity of the specific design features. The Work of Art exudes total confidence in playback and displays a mastery over the music, showing superior competence in dynamics, naturalness, harmonics, image size and specificity. Coupled with the Vector tonearm, the Work of Art brings vinyl reproduction closer than it has ever been to that natural, effortless, powerful sound of high-speed analog master tapes.